Hi, everyone. In addition to that lovely review from Library Journal over the weekend, I also did an interview with them that I’m just seeing now. Thought you might like to see an excerpt — with a link to the full article.

Libby Fischer Hellmann smoked her first cigarette behind the United States Capitol Building. Born in Washington D.C., Hellmann started her career with the public television unit that first paired Robert MacNeil and Jim Lehrer. Among her credits, she worked on the rebroadcast of the Watergate hearings. In short, she understands American power. She knows that the most important stories don’t make it into newspapers or telecasts. The truth can come from novelists who smoke cigarettes out behind the halls of power.

In Hellmann’s fifteenth thriller HIGH CRIMES, resistance leader Dena Baldwin is assassinated at a mass demonstration fourteen months after the 2016 election. The gunman is found dead on a rooftop near Grant Park in Chicago. Hellmann deploys fan favorite Georgia Davis, P.I., to track down the person or persons who ordered the hit. Georgia soon discovers rightwing enemies lurking behind fake profiles amongst the victim’s 42,000 Facebook followers.

Following the 2016 election, Hellmann found herself consumed by the drama of current events. “I didn’t write for an entire year,” she said, “I hung out on Twitter.” Having fled Washington years ago, she hunkered down in her Chicago office and watched the underground action online. Hellmann was following a Facebook activist group when inspiration struck. “There’s this little spark in your belly that fires when you know you have the right story.” Hellmann reached out to the group’s founder and said, “I want to write a book but you are going to die in the first chapter. Is that okay?”

Libby Fischer Hellmann loves her adopted hometown of Chicago, but remembers her lessons from Washington and Watergate. Big power players, she says, “don’t have issues with violence. Particularly if it goes in their favor.” As she watches strongmen rise around the world, Hellmann hopes we never see deadly political violence here. But, she says, “I can’t rule it out.”

In HIGH CRIMES, Georgia Davis has no political views. She looks only for the truth and, with 42,000 suspects, finds plenty of corruption and depravity. “I really tried to keep it even handed. The Resistance activists aren’t clean and snowy white. Some of them are opportunists. Some of them are looking for glory. Some of them are getting their rage out. They run the gamut just like the people they are trying to confront.” On whether she thinks her readers will accept a complex view, she said, “While I’m sure some readers will be offended, I also hope they will recognize that these characters make mistakes and are sometimes misguided. In other words: human.”

In our current season of discord, Libby Fischer Hellmann finds friendship and solidarity with her fellow mystery writers. She formerly served as the national president of Sisters in Crime, a 3500-member mystery authors’ organization. “You’d think that writers are isolated and competitive,” she says, “However, the mystery community is generous and open. I spend hours on the road with Cara Black and UK author Zoe Sharp brainstorming each other’s stories. I love that about our community.”

Read the rest of the article here. And thanks for taking a look. Btw, HIGH CRIMES is widely available in print, audio, and ebook. And, if you’re looking for great ebook prices, check out my online store.

Featured Book:
An Eye For Murder 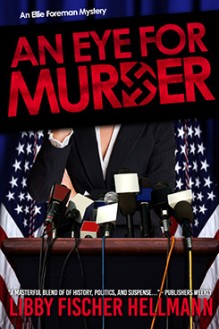 Read an extract of An Eye For Murder