A Motion Picture In Slow Motion

I’m thrilled to host my friend and fellow writer Deborah Donnelly today. She actually had one of her books made into a TV movie! See? It really can happen. Here’s Deborah’s story.

I used to be a terribly impatient person. Now I have a black belt in waiting.

You see, Veiled Threats, the first title in my Wedding Planner Mysteries, is going to air on Hallmark Movies & Mysteries on October 19. And it only took nine years to get there.

Back in 2005, a cousin of mine gave Veiled Threats to a buddy of his, an independent film producer. I say that as though I know what “independent film producer” means. I don’t, not exactly. But I was thrilled to get that first phone call from the producer, and waited eagerly for the option to be negotiated and the check to arrive.

But was I ever happy to get that check! And happy every year thereafter, as the option was renewed again and yet again and yet again. There were nibbles from a studio here and there, there was a tug on the line every once in a while, but mostly the years just went by. Then at last came a plot twist: Hallmark was interested. Interested enough to make a movie? Well no, not yet. But willing to talk about it.

From time to time over the next eternity, I’d get a bulletin from my agent. The talks with Hallmark were “continuing.” Then they were “promising.” At one heady moment the talks were even “advanced.” Mostly, the talks were slowwwwww.

Then suddenly the talking stopped and, oh joy oh rapture, a screenwriter was hired. Was I consulted about the script? Do I look like J.K. Rowling? I went back to waiting.

Finally, early in 2014, filming began with Vancouver B.C. standing in for Seattle. I was not invited. But I was paid. Not quit-your-job money, but not nothing. Plus I had the exquisite experience of going online and seeing my very own character, wedding planner Carnegie Kincaid, heading up a cast list on IMDb.

Carnegie, who I invented out of my own head, right there on IMDb! And there was my smoldering attorney Holt, and my irrepressible reporter Aaron, and…

Whoa, wait just a darn minute. Aaron is supposed to be shorter than Carnegie, that’s part of the comedy in my romantic comedy/mystery. So how come the actor playing him (second from left) is four inches taller than Erica Durance, who’s playing her?

And what’s this guy Switchblade doing on the cast list? I never wrote a character named Switchblade. And where’s the fan favorite Boris the Mad Russian Florist? And don’t tell me they’re really going to call the movie “Wedding Planner Mystery.” I thought that was a placeholder, not the actual title!

Aha. Now the realities of TV movie-making were starting to sink in. They get to call it what they want. This is not a film OF my book, it’s a Hallmark movie based ON my book. So a photo shoot on the slopes of Mount Rainier was probably a no-go. Not to mention that underwater sequence beneath Carnegie’s houseboat. And of course they couldn’t jam all the subplots into a single movie. As for my not-especially-graphic sex scenes, well, this is Hallmark, after all.

So. Let’s just say that having one’s 350-page book transformed into a lower-budget, two-hour, family-friendly movie is a lesson in patience, gratitude, and acceptance. I’ve been ever so patient. I’m exceedingly grateful. And on October 19 at 9 pm Eastern, 8 pm Central, I’m going to switch on Hallmark Movies & Mysteries and settle down with a bowl of popcorn, heavily seasoned with acceptance. I hope you’ll join me.

P.S. Good news! The Hallmark movie’s in the New York Times. Not such good news! They don’t look upon it any too favorably. Now I’ll admit, they have a point about the chirpy perkiness and the perky chirpiness. But better that than the criticism leveled at the other movie mentioned. “Humorless gore”? Bleahh. Anyway, all publicity is good publicity, right?

Deborah Donnelly is the author of Veiled Threats, Died to Match, May the Best May Die, Death Takes a Honeymoon, You May Now Kill the Bride, and Bride and Doom. Read sample chapters on her website and more about the movie here. 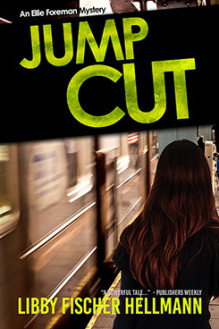 Read an extract of Jump Cut