A Shot to Die For 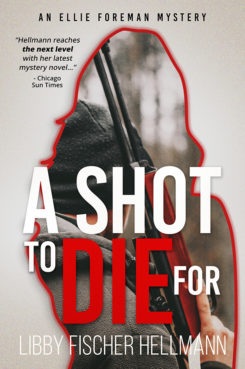 In this fourth title in the Ellie Foreman mystery series, the Chicago documentary filmmaker finds herself in Lake Geneva, Wisconsin. Returning from a video shoot at the Lodge, a newly renovated, upscale resort, Ellie befriends a woman who claims her ride abandoned her at a highway rest stop.

But Ellie’s kindness is brutally cut short when a pickup truck pulls up, the rear window opens, and the woman is shot dead. Even with her history of sleuthing, Ellie is not eager to get involved. Then the victim’s family arrives and begs for information. When the second shooting occurs, Ellie decides to poke around on her own.

She is soon drawn into the history of a wealthy and prominent family, deeply rooted in a magnificent mansion on the shores of the lake, and surrounded by an elaborate web of lies, murder, and family secrets that have plagued both them and the town for years—secrets that now place Ellie in the crosshairs of a killer.

“What do you mean you’re not coming? You were supposed to meet me! We had a date!” With each syllable the woman’s voice slid up the register toward hysteria.

I slowed my pace. I was walking toward the Lake Forest rest stop—an oasis, we call them here—just off the interstate near the Wisconsin state line. The woman was talking on her cell phone about thirty feet away, but her voice carried clearly. “How could you do this to me? After all our plans! You knew I’d be stranded!”

A man with a buzz cut and horn-rimmed glassed stood near the entrance, his hands in his pockets. He stepped aside as I approached.

A tall, striking woman who appeared to be somewhere in her thirties, she was wearing a white t-shirt, khaki miniskirt, and sandals. Her shoulder-length hair, held off her face by a wide headband and a pair of shades, was a glossy black. Blue highlights glinted when she moved her head.

I went inside the building, which since its multi-million dollar renovation, looked more an airport terminal than one of the antiseptic fast food places that used to commandeer pit stops on the highway. Donuts, pizza, coffee, and burgers beckoned me from cheerful kiosks, and it took all my resolve to resist them. I was tired, having spent the day scouting locations for a video about The Lodge, a luxury resort in Lake Geneva, Wisconsin. I’d stopped in for a cold drink before heading home to Rachel, my fifteen year old, who was in the midst of a what-am-I-going-to-do- all-summer-since-I’m-too-old-for-camp crisis.

I bought a diet coke, eyed the Krispy Kremes and quickly headed back outside. A Thursday evening in the third week of June, it had been a hot and humid day. Now, though, a cool front was pushing through, and a breeze was chasing away the heat.

The woman was still on the cell. “I know. I’m sorry, too. I hate it when we fight.” There was a pause. “I realize that. It’s just—well, this has been a shitty day.”

The man who’d been standing near the entrance had his back to her as though he was trying not to listen to her conversation.

“I can’t,” she said. “My cell is out of juice.” She repeated. “Okay. Thanks. I’ll be waiting. Please come soon.” The woman disconnected and looked around. Spotting the man at the entrance, she walked over and handed him the cell. “Thank you. You’ve been very kind.”

The man pocketed the cell. “No problem. I hope everything works out.”

The man raised his hand and started across to the parking lot. The woman went inside. I looked at my watch. Almost seven. I wondered if Rachel had eaten. Maybe I should go back in and pick up a pizza. For now, though, I lingered outside with my drink, letting the cool breeze wash over me.

I was just about to go when the woman came back out, carrying a drink. She walked over to a three foot high brick wall that ran the length of the building between the building and the parking lot. Turning her face into the wind, she lifted her hair off the back of her neck.

It had been hot in Lake Geneva, the breeze that usually keeps things cool apparently AWOL. For over a century wealthy Chicagoans escaped the blistering Midwest summer at the “Newport of the west,” where they built luxurious estates and fueled a culture of privilege and class that rivaled anything on Martha’s Vineyard or Nantucket. And though the resort’s exclusivity had faded over time, tourists still flocked to it, a fact that has not gone unnoticed by developers. The Lodge’s owners snapped up the property as soon as it became available, proving once again that as landmarks turn populist, they become marketable.

About twenty miles southeast, this was the only rest stop between the North Shore of Chicago and the Wisconsin state line. Access ramps led from the highway to a paved surface the size of a football field. The building that housed the food court occupied the middle of the tarmac and hung over both sides of Ninety-Four. Parking lots flanked with gas pumps sat on both sides.

The young woman sighed. “I guess it’ll turn out okay after all.”

The door to the restaurant opened, and an elderly couple came out. The man, his thick white hair neatly parted on the side, carefully avoided eye contact with both of us. His companion, a seventyish woman with a wide-brimmed straw hat, tightened her lips when she saw me. I wondered what I’d done to annoy her or whether she was just the kind of person who disapproved of everyone. The young woman flashed me a sympathetic smile. I smiled back.

As the couple made their way to the parking lot, four red-faced kids in tanks and shorts pushed past us on their way into the rest stop. They smelled of sweat and sun block and seemed oblivious to everything except themselves.

“I couldn’t help overhear. I hope your ride gets here soon,” I said.

The young woman tipped her head. “Me too. I’ve lost the whole day.”

“It should never have happened.”

I nodded. The breeze was so refreshing I hated to leave. I slung the canvas bag that doubles as my briefcase onto my shoulder and joined her at the wall. As long as we were both hanging around, I might as well be nice. She perched on top, her legs dangling in front. Close up, she was stunning, her black hair thick and wavy—without a hint of gray, I noted enviously—her skin olive-gold. She had wide, jade-green eyes, and those legs would pass what my father called the “Betty Grable” test with flying colors.

I pressed down on the tiny web of varicose veins above my knee, willing them to disappear, but they popped back out when I lifted my thumb off my skin. I sighed. “What’s your name?”

“Daria.” She swung her legs back and forth like a kid.

“I live in Lake Geneva.”

“Small world. I’m producing a film up there.”

Daria nodded. “I know it well.”

The Lodge had been built by Hugh Hefner in the early Sixties and was a popular Playboy resort until his empire collapsed in the Eighties. It passed through several sets of hands after that, each owner removing more traces of its glamorous X-rated past. Now it’s such a G-rated facility that a bronze statue of a father with a little boy on his shoulders greets guests at the front door.

I scanned the cars heading up the ramp on our side of the rest stop. A silver Beamer slowly turned in, followed by a green pickup with a camper shell. “Is that your ride?” I pointed to the Beamer.

Daria shaded her eyes and looked. As the car passed, we could plainly see a couple in the front seat. The woman in the passenger seat motioned to an empty space in the parking lot. As the Beamer swerved into the spot, Daria seemed to deflate.  “No.”

I hoisted my bag further up my shoulder. “Well, don’t worry. I’m sure your boyfriend will be here soon.”

She was about to say something when the pickup that had been behind the Beamer passed us. It slowed to a crawl, and the window at the back of the camper shell slid open. The movement triggered a prickly feeling at the back of my neck.

I turned to Daria. She stared at the pickup. I was about to ask if she recognized it when I heard a loud crack. I whipped around. The pickup’s engine revved, and it tore out of the ramp. I turned back to Daria. A crimson design exploded on her shirt. She fell forward off the wall and crumpled to the ground.

Libby Fischer Hellmann has already joined an elite club: Chicago mystery writers who not only inhabit the environment but also give it a unique flavor…

Hellmann reaches the next level with her latest mystery novel…

This Libby Fischer Hellmann book is the best one yet… By every possible measure, Hellmann’s status as a storyteller has grown. Plot development is masterful… intriguing, realistic characters… has me itching for the next book.

A traditional mystery with a modern edge… the author’s confidence shows from beginning to end… refreshing as soft serve ice cream on a hot summer night.