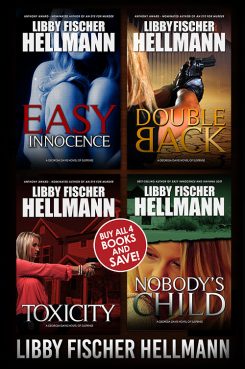 PI Georgia Davis burst on the scene in Libby Fischer Hellmann’s EASY INNOCENCE (2008). That was followed in 2009 by DOUBLEBACK, which reunited Georgia with Ellie Foreman; TOXICITY, the prequel to the series; and NOBODY’S CHILD, the fourth Georgia Davis novel. Now these four books are together in one volume at a very affordable price.

TOXICITY (2011)
Ten years before Easy Innocence, three bodies turn up in quick succession—all of them dumped in waste disposal dumpsters or landfills. Officer Georgia Davis, her boyfriend detective, and his partner team up and find much more than they bargained for.

NOBODY’S CHILD (2015)
A bloodstained note left for Chicago PI Georgia Davis reveals the shocking existence of a half-sister she never knew about. That sister, Savannah, is pregnant and begging for Georgia’s help. Determined to track her down, Georgia finds herself heading deep into the dangerous underworld of Chicago’s illegal sex trafficking business. She soon discovers that trafficking is just a small part of the horrifying and deadly situation in which her new sister is caught up.

There’s a new no-nonsense female private detective in town: Georgia Davis, a former cop whois tough and smart enough to give even the legendary V.I. Warshawski a run for her money.

Hellmann writes in many genres, but her Georgia Davis series may just be one of the best crime thriller series being written today.

Hellmann brings to life the reality of  bullying among teenage girls with enough twists and turns to keep you reading. Highly recommended.  (Starred Review of EASY INNOCENCE)