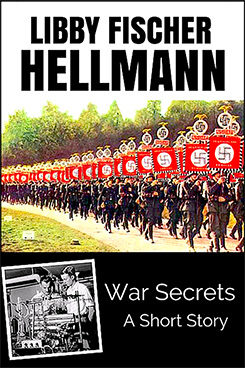 “War Secrets” was accepted into THE MYSTERY BOX, an anthology published in 2013 by MWA (Mystery Writers of America) and edited by Brad Meltzer. In this story, I explain the “loose thread” I purposely left at the end of my thriller A BITTER VEIL: namely, how did Anna Schroder’s father, a scientist and former member of the Nazi party, form a relationship with a Kurdish Jew? Of course, the story stands on its own as the premise of the anthology is “Secrets”—secrets that can  significantly impact individuals, families, communities, even entire cultures. Plus, the setting is one of my favorites: Pre-war Nazi Germany, where the extreme conflict of “going along to get along” produced both heroes and cowards. You will meet both in “War Secrets.”

The chill that ran through Davood Sarand had little to do with the frigid winter air. Where was Julia? He had been knocking so long his knuckles were raw. He was to have tea with her parents at four. It was half past the hour now, a gloomy dusk settling over the city of Leipzig, stealing its colors and shapes.

The Goldblums lived on the third floor of a stone facade building just west of the city, not far from Rosenthal Park. Once an elegant example of Jugendstil architecture, the building was now silent and worn, as if the weight of time, and now the War, had crushed its Art Nouveau pretensions. Davood peered over the landing at the staircase below. He was about to go hunt for her when the outer door squeaked open.

Davood smiled, the way he always did when he saw her. A few fat snowflakes had settled on her brown hair and coat. She was carrying a small cardboard box tied with string. Her cheeks were flushed, her blue eyes luminous. Was that because of him? Or merely the result of the cold?  He let out a relieved breath. “Where were you?”

“At the bakery, my love.” She held up the box. “Mr. Bruchner wasn’t supposed to, but he gave me some wonderful pastries. You won’t find anything better —even in Vienna.” She studied his face, then ran the back of her hand down his cheek. “Davood,” she crooned, rising to her toes. “Please do not worry. I am fine.”

He kissed her lightly on the lips.  “Yes, well, what about your parents?”

“They won’t open the door if they do not know who’s there.” She shrugged.

Davood’s smile faded. “I want to tell them, Julia. Today.”

“Today is not the right time. They are just meeting you.”

“But if they know— it may put their mind at ease.”

“Cheri,” she said—the French term made him feel sophisticated and worldly, and she knew it—“It’s enough that you’re Persian. They won’t be able to take in the rest.”

Inside, Julia made introductions. “This is the man I’ve been telling you about.”

Davood shook their hands and offered Frau Goldblum the bouquet of flowers he’d brought. Although they were nearly frozen, her mother seemed pleased and put them in a vase. They sat in a parlor crowded with dark, over-stuffed furniture.

Julia was right. The Goldblums were old. Herr Goldblum was stooped with arthritis, his skin pasty, and his shaggy white eyebrows reminded Davood of his grandfather. Her father had been a successful furrier, Julia had said, until the Nuremberg Laws in ‘35. He’d tried to save his business, first by turning its management over to a Gentile friend, then watching his “friend” steal it at a rigged auction. They would have left in Thirty-six, and again after Kristallnacht, but for Julia’s mother. A frail wisp of a woman, she’d had scarlet fever as a child and never completely recovered. She married late, had Julia even later, and always seemed to be ill from one thing or another.

Julia poured tea and passed around the pastries, chatting about the bakery and the wonderful aromas emanating from the shop.  Davood let her finish, then turned to Herr Goldblum.

“Please don’t think I’m being rude, sir, but given what you’ve suffered these past years, why do you stay in Germany?”

Goldblum eyed Davood with suspicion. “Why do you want to know? Who are you?”

Her father stirred his tea, then set the cup and saucer on the tray. He sniffed. “Where would we go? We have no connections in England, America, or Shanghai.”  Palestine wasn’t an option either, he went on. “We are Reform Jews and have no special allegiance to the Homeland.” Goldblum paused. Then his spine stiffened and his eyes narrowed. “Why do you care? What do you know about our lives? You…” he sniffed again. “are a scientist for a Nazi. And you’re Muslim. I must confess, young man, that the only reason we agreed to this—this meeting is because our daughter insisted.” Goldblum swiveled away from Davood, effectively cutting him out of the conversation.

Davood felt the heat on his cheeks. He’d just been put in his place. Julia pursed her lips and changed the subject to a Beethoven symphony she’d heard on the radio. Her parents chattered as if they’d heard it too. Davood’s frustration grew. They should be talking about important matters.  It was 1939. War had been declared, although so far people were calling it der Sitzkrieg, the Sitting War, or as the English said, the Phoney war. There had been little fighting and no major attacks, but the sense of impending doom was as real as the snow blanketing the city. It was difficult to be in Germany. More difficult to be a Jew. They should be talking about how to escape, not Beethoven’s Fifth.

There’s nothing more mysterious than a locked box. Whether it’s a literal strongbox, an empty coffin, the inner workings of a scientist’s mind, or an underground prison cell, there are those who will use any means necessary to unlock the secrets of…THE MYSTERY BOX