You are here >> - Publishers Weekly Interview with Libby Fischer Hellmann

With a background in producing videos commercially, Libby Fischer Hellmann bears a certain similarity to her amateur sleuth Ellie Foreman. “I made Ellie a video producer because I have some knowledge about how it’s done, and it also serves as a vehicle to get her involved with different people and different issues,” says Hellmann. “People who know me say she’s exactly like me. But she isn’t like me at all. Ellie is a braver person than I am. She’s more noble.” Making her latest appearance earlier this year in An Image of Death (Poisoned Pen Press and Berkley Prime Crime), Ellie starred earlier in An Eye for Murder and A Picture of Guilt. Hellmann herself takes the spotlight today at the Poisoned Pen booth (1651), 10-11 a.m.; in the Sisters in Crime booth (4557), noon-1 p.m.; and in the autographing area, table 4, 2-3 p.m.

“I’d written fiction prior to An Eye for Murder,” says Hellmann, “three police procedurals, but they never felt ready. I’ve read mysteries for years, some so bad I’d want to throw them across the room and some really inspirational. I thought, if I could ever write a paragraph like James Lee Burke, I’d be happy.”

Hellmann’s past also includes stints producing news for PBS and NBC. So, she says, “I was always writing—news copy, speeches, video scripts. Writing fiction is the hardest thing I’ve ever done. [Even so, An Eye for Murder was Anthony-nominated for best first mystery.] But satisfaction comes on several levels: choosing exactly the right adjective or verb, or when a paragraph absolutely works and says what you want it to, or when a chapter has the right arc.”

Hellmann also derives satisfaction from the fact that Chicago itself is key to her plots. The city, which has been the Washington, D.C., native’s adopted home for 26 years, is “incredibly important,” she says. “I love this city, and part of the joy I have is setting the books in entirely different neighborhoods. That lets me explore and look at Chicago almost as an outsider.”

Hellmann has a 20-year-old son in college, but something else she and Ellie have in common is a 15-year-old daughter. “So there is a ready source of research available for me,” she says with a laugh. 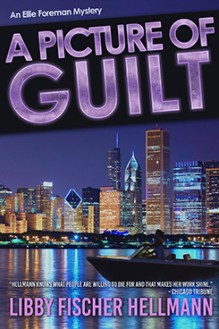