Everyone’s heard about Los Alamos, where they built and tested the first nuclear weapon. But few people seem to know about the role that Chicago played in the development of nuclear fission and its ultimate military application. That fascinated me when I set off on a voyage of discovery into the dark days before the bomb. Before Enola Gay, before Hiroshima, when the Allied war effort struggled against the Nazis’ seemingly unbeatable might.

My latest novella, An Incidental Spy, tells a good part of that story and, hopefully, will give readers insight into the international situation, the desperation of the various spy networks involved—both allied and enemy—and the ordinary lives that were destroyed in the process (I’ll have more to say about the characters in the story later). And while it’s hard to see the development of nuclear weapons as a good thing in retrospect, it’s likely the first two, dropped on Japan, saved millions of lives. As they say, desperate times tend to bring desperate measures.

The fact is that Chicago played a key role during those dark days until December, 1942. Under the leadership of Arthur “Holly” Compton, the University of Chicago became the first site in the United States to actually create a sustained nuclear chain reaction. One of the first prototypes of a nuclear reactor, affectionately called “The Pile,” 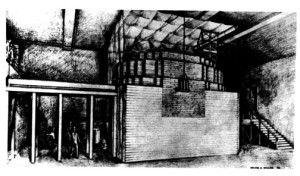 had been built under Stagg Field, the stadium where U of C students played football. That’s where The Incidental Spy takes place, btw.

But there was much more going on after the first chain reaction was produced, including work at Oak Ridge TN and Fermilab (also near Chicago) on our side of the Atlantic. There were also a host of parallel German efforts on the other. 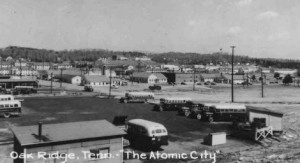 Oak Ridge didn’t exist, at least on the maps of the time. During WW2 it was simply known as the “Clinton Engineering Works.” Covering 60,000 acres of farmland near the Appalachian Mountains, it was one of America’s three most secret ‘cities’, each carefully chosen to play a part in the Manhattan Project.

The Director General at the time evacuated the original inhabitants and turned the cities into atomic bomb nurseries. The people employed there were tasked with making the materials needed for a bomb, and their work with uranium was strictly top secret. Some workers never spoke about it, staying silent long after the war ended.

A total of 75,000 government staff and builders worked at the site between 1942 and 1945. But most ordinary folk had never heard of the technology when it was finally used to flatten Hiroshima on August 6th 1945, an act which stopped the war with Japan more or less instantly.

Today Oak Ridge is an ordinary town, proud of its atomic heritage. It’s home to two of the planet’s most advanced neutron science research labs and the US government is still the area’s biggest employer. 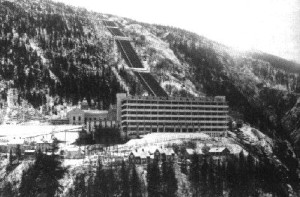 While our home-grown heroes were working hard in the US to create a bomb to end all bombs, the Germans were on much the same track, led by German physicist Werner Heisenberg. One of his best known ideas concerned ‘heavy water’, and experiments took place in Norway. Fortunately, they never came to fruition.

“The Norwegian heavy water sabotage was a series of actions undertaken by Norwegian saboteurs during World War II to prevent the German nuclear energy project from acquiring heavy water (deuterium oxide), which could be used to produce nuclear weapons.

In 1934, at Vemork, Norsk Hydro built the first commercial plant capable of producing heavy water as a by-product of fertilizer production. It had a capacity of 12 tonnes (13 short tons) per year. During World War II, the Allies decided to remove the heavy water supply and destroy the heavy water plant in order to inhibit the Nazi development of nuclear weapons. Raids were aimed at the 60 MW Vemork power station at the Rjukan waterfall in Telemark, Norway.”

Btw, I talked about the excellent series that was created about that sabotage last week. Thanks to the British SEO – the Special Operations Executive – and the Norwegian Resistance, February 1943 finally saw a team of specially-trained Norwegian Commandos destroy the facility before it was too late.

The German nuclear weapon project was called the Uranverein, aka the Uranium Club. Intended to develop and produce nuclear weapons during WW2, it kicked off in spring 1939, just a few months after the Germans claimed to have cracked nuclear fission  for the first time.

Thankfully the first project ended early, only a few months after it started, when Germany’s invasion of Poland saw most of the best physicists drafted into the Wehrmacht. Things started off again in autumn 1939 with a three-pronged approach looking at the nuclear reactor itself, the uranium, and the heavy water.

In early 1942 the Germans, still under the leadership of Heisenberg, who had been an associate of Einstein and Neils Bohr before the war,  decided that nuclear fission wouldn’t help them win the war and shelved it. The project was taken over by the Reich research Council and split between nine different institutes. Because each of the nine directors followed their ego, dominating the research and working to their own personal objectives, it failed. Thank goodness.

Every time I read about WW2 I’m amazed at the way things developed. History could so easily have been different. The allies could have lost the war and on many occasions, almost did.

I hope An Incidental Spy, will give readers a real feel for the urgency, the high stakes and the terrible danger anyone whose life was touched by the race for the A-bomb faced. Every one of them was a hero.

More next week in this short series looking at the historical background to my latest story, And, for those of you who know this history backwards and forwards, I realize I have simplified quite a bit. I hope you will understand. 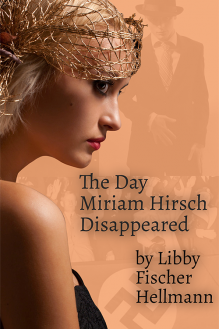