You are here >> - Libby Fischer Hellmann’s Blog - Book and Special Events - What’s In A Title?

What’s In A Title?

A book title has a critical job, much the same as an opening paragraph: if it doesn’t grab the reader instantly, and inspire them to turn the page, you’re lost. The title of a book or story can make all the difference between it being read or ignored.

A book title should be appropriate – in other words,  it should hint at what’s inside. Even more importantly, the book title you choose for your masterpiece will live on and on, with a bit of luck outliving you, the author. As the public face of your work, it has to be right. At the same time, book titles can be subjective. Some readers might love your title, others might hate it or find it offputting. There’s not a lot you can do about that.

Who does it best of all? If you’ve ever thought Hemingway’s book titles were the ultimate in cool, join the club. The Sun Also Rises, The Old Man of the Sea, For Whom the Bell Tolls, A Moveable Feast, In Our Time, To Have and Have Not, to name a few. They’re all short, punchy and intriguing, and they all hint at something seriously special between the covers.

Hemingway also agonized over titles. The Sun Also Rises was the final choice, but early alternatives for the novel include Fiesta: A Novel, Two Lie Together, and the unsuitably long For in much wisdom is much grief and he that increases knowledge increases sorrow, lifted from the bible.

Taking control of my own book titles

In my early days of publishing the short, punchy original titles I’d given my first four Ellie books were changed by Berkeley Prime Crime:

I considered changing them once I got my rights back, but by that time, it seemed too late. Once I changed publishers, however, the titles got punchier.

Easy Innocence kind of titled itself, which was the only time the title just emerged out of the sky without my having to obsess. My editor came up with Doubleback: I knew I wanted the word “double” because it’s a plot involving both my series sleuths, Ellie Foreman and Georgia Davis, but I’d run dry. ToxiCity was a no-brainer because of the subject matter, and Nobody’s Child was a relatively obvious choice considering the book’s themes. Jump Cut, my 5th Ellie book, which is coming in March 2016, is the kind of title I wish I’d had for the first four Ellie books. But I suppose better late than never, eh?

The title for my latest novella

Speaking of titling your work, my latest novella, The Incidental Spy has just come out. In the 30 second video below, I talk about where the novella got its name.

If you don’t have a Street Team, then maybe some of these other ideas will help.

Following are a few guidelines I take into account when titling my stories.
1. First, a title can’t be dull. It needs to catch the eye online and off. After all, it’s competing for attention with thousands of other books and novels.
2. Second, it should be easy to remember. Why? So readers can recommend it to other people without having to struggle to recall what it’s called. It might seem like a little thing but where book sales are concerned, there’s no such thing as unimportant.
3. Third, less is more. There’s no need for a lengthy and complex sentence-length title when one, two or three well chosen words can encompass the book’s subject and personality.
4. Fourth, I take care not to confuse potential readers. Don’t call your book ‘The Space Race’ if it’s actually about superpowers’ race to claim their stake in the Arctic. There’s no point being so ‘clever’ that most people completely miss the point. By the same token, if the title is too generic, or too abstract, you’ll lose readers.

If you think this is beginning to sound a lot like marketing, you’re not wrong. Figuring out the best title for your book is indeed a mini-marketing task.

Titles are a bitch! What’s your favorite?

Still, titles are a bitch. What’s the best book title you’ve ever come up with or read? Why? 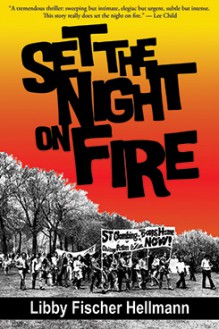 Read an extract of Set the Night on Fire